Secession was not entirely a new concept for Americans and especially Southerners’ at this time. In 1812, Vermont, Massachusetts and Connecticut almost secede over the war with Britain. By 1832, it was a hot topic for Southerners. The federal government had passed a tariff that favored Northern industry. Southerners called the tariff “The Tariff of Abominations”. At one time, the tariff was at 47% which almost doubled the cost of foreign goods purchased by Southerners. Northern merchants used the situation to raise their prices. It also caused a decline in Britain’s orders for Southern cotton. This tariff lead to John C. Calhoun writing the “Nullification Papers” (He wrote this manuscript at a house on 94 Church Street.) Calhoun at this time was the Vice President under Andrew Jackson. This document declared that a “state could refuse to obey federal laws if a state deemed them unconstitutional. “

Things quieted down for a bit and then started to heat up again in 1851. Every year on “Carolina Day”, Charleston citizens would celebrate at Fort Moultrie the Battle of Fort Sullivan. This battle during the American Revolution was where Colonial William Moultrie was able to beat the British and save Charleston from being captured. It was one of the 1st major battles that the Patriots won against Mother England. In 1851, the Federal government would not let the citizens of Charleston into the fort for the annual celebration. Soon after that episode, the Palmetto Guard was established and in April of 1852 South Carolina moved to secede.

By the time 1860 rolled around things were at a boiling point. The South Carolina Assembly delegates were meeting in Columbia, South Carolina to decide if secession was going to happen. Originally Georgia then Alabama was to secede first but they did not do so. It was left up to the South Carolinians. It was whispered among the men that this time it was really going to happen. But wait, the delegates did not want to be Columbia, they wanted to be in Charleston where they could get more bang for their buck. Charleston was the hot seat for secession and had been pushing for it for years. Suddenly there was an “outbreak of small pox” (at that time there was 1 reported case of small pox in Columbia). Off went the delegates to Charleston were they reconvened at St. Andrew’s Society Hall and here a roll call vote was taken in 8 minutes.

Unanimous vote, South Carolina had seceded from the Union. 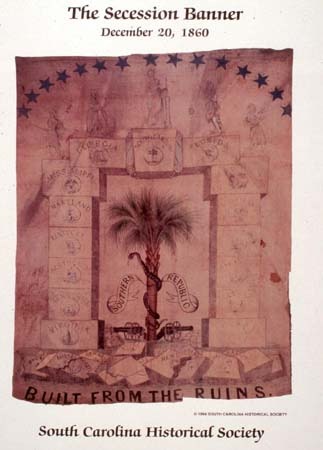 Shouts of celebration erupted through the city as it was announced. To make this even a bigger deal, it was decided that the document would be signed at the South Carolina Institute Hall. The hall could hold 3,000 people and it was the place to be that night. A standing room only crowd waited for the delegates as they marched down Broad Street to Meeting. As they walked, they grabbed one of the many banners that were flying for the buildings. This was to be their symbol. The banner shows a mighty arch with 15 squares that represented the New Confederacy. John C. Calhoun stands at the top holding the constitution and below are words “Built from the Ruins”. The banner was hung across the stage behind the table when the gentlemen were signing the Ordinance. During the war, the banner made its way to New England where it was safely kept until 1963 when it made its way home again. Unfortunately it laid discarded for many in years in a bottom of a drawer.

Now it can be seen at the South Carolina Historical Society.

After the delegates made their way to South Carolina Institute, the document was read to the audience: “An Ordinance to dissolve the union between the State of South Carolina and the other States untied with her under the compact entitled “The Constitution of the United States of America”…

Per the Charleston Mercury Newspaper during the reading of it “the men could contain themselves no longer, and a shout that shook the very building, reverberated, long-continued, rose to Heaven, and ceased only with the loss of breath.” It took 2 hours for the Ordinance to be signed. The signers of the Ordinance were the “who’s who” of South Carolina politics before and during the War. These men were so proud: “the greatest honor of my life” and “the proudest day of my life”. Cannons were fired, bands played and rockets exploded. The celebration continued around the South for several days. Several cities had 100 gun salutes. In Charleston, the newspaper headlines were “The Union is dissolved”. 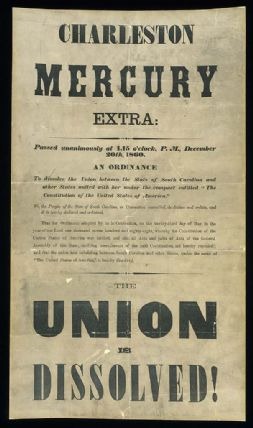 Not all thought this was a wise idea. A Charlestonian, James Louis Petigru remarked that “South Carolina was too small to be an independent nation but too large to be an insane asylum.” The last surviving signer passed away in 1914.

Immediately following the signing, delegates were sent to all the Southern states with the news and the task of urging the other states to follow suit. 4 months later by the time the 1st shots of the Civil War, 6 other states had joined the Confederacy. Not all of the Southern States secede (Kentucky, Maryland, Delaware and Missouri did not) Tennessee only seceded after the Governor made the decision. The populace vote had defeated the proposal.

The Original “Ordinance of Secession” did survive the war and is kept in the South Carolina archives in Columbia, SC. The document has been in the hands of a South Carolina official ever since that fateful night in 1860. Many times during the war, Union soldiers thought they had found the original but what they came across was one of the 200 lithographs made of the document. These were such excellent copies that in 1966 the Mayor of Keokuk, Iowa offered to return “the Articles of Secession from the Union by your State in the year 1860”. Even having one of the lithograph copies was a prized possession. In 1865, as Yankees were approaching Governor John L. Manning’s home, he stuffed his copy behind an “immense Empire bookcase”; it was discovered nearly 100 years later.

Today the document looks very little like the lithograph copies. The original was very badly faded; even the ink blots from the day of the signing had disappeared, so somewhere between 1890-1894, the original was re-inked by a German scribe. (On the lithograph copies you are able to see those ink blots.) All that is left of the St. Andrews Society Hall and the South Carolina Institute is the ironworks in front of a parking lot which use to be the home of the St. Andrews Society. A great fire burned through the city in 1861 and destroyed both of those buildings. (We will save that story for another time.) 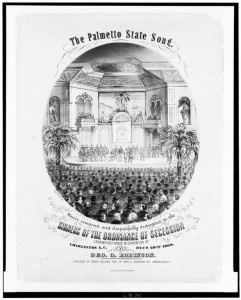 So began the events that would change the course of our history. Next month, I will talk more about what “Ordinance of Secession” meant.

May you all have a wonderful holiday season!