Arrr, Pirates off the Port Side

September 19th was “Talk Like a Pirate Day” and that got me thinking about this month’s blog. The threat of a pirate attack was very real for the new colony of Carolina. This was one of the reasons why the colonists built a wall around their town when they moved to the peninsula area in 1670. Famous pirates such as Blackbeard, Stede Bonnet and Charles Vane have sailed along our shores but have you ever heard of Anne Bonney and Mary Read?

Anne was born in Cork, Ireland sometime between 1697-1705. Her father was a successful lawyer who was caught having an affair with her mother, the maid. No longer able to live in Ireland the threesome left and headed for Charles Town. Around the age of 13, Anne lost her mother. Her father was not very good at being a parent and he had a hard time managing high-spirited Anne. One of Anne’s favorite things to do was to dress and act as a boy. She was also very good at shooting, hunting and riding and had ‘the mouth of a sailor”. By the time she was 19; her father had enough of her antics and arranged a marriage for her. Anne had no interest in this and eloped with a young sailor and off she went to explore the world. Anne quickly became bored with her new husband and started to despise him because he became a pirate informant for the royal government. About that time, a pirate named Calico Jack was in the town of New Providence, Bahamas and saw Anne. The two fell in love. Anne’s husband would not grant her a divorce so she and Jack recruited a crew, stole a ship and set sail.

Mary was the 2nd child of a young woman whose husband was lost at sea. When the husband did not return, Mary’s mother had an affair. She ended up pregnant and was embarrassed to have a bastard child so she left town to have the baby. During that time, the older child, a boy died. But when the money ran out, Mary’s mother was forced to go to her mother-in-law for assistance. She dressed Mary up like a boy so she could pass her off as the women’s grandson. It worked. The grandmother provided a crown a week for support of her “grandson”. From then on Mary was brought up as a boy and at the age of thirteen, she had a position as a footman to a French lady. Ultimately, this lifestyle lead Mary to spend time in the army and aboard a man of war ship. Mary did end up getting married but after her husband passed and her money was dwindling, she resorted to dressing like a man again to gain employment. She found herself in Nassau.

It is said that Anne Bonney was attracted to a certain young man in Nassau and made her feelings known. She got quite a surprise when that young man turned out to be a woman named Mary Read. The women developed a strong friendship and decided to go off pirating together with Calico Jack. Women were banned from pirate ships so Anne and Mary had to disguise themselves as men. It was said they “wore men’s jackets and long trousers and handkerchiefs wrapped around their heads… a machete and pistol in their hands and cursed and swore at the men…” 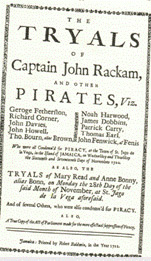 Pirating was successful for awhile but it eventually caught up with them. An evening of drinking rum caused the crew to be useless and spineless as they were attacked by a privateer sloop. The men hid below deck while Anne and Mary were left to defend the ship. Mary “called below to those under deck to come up and fight like men and finding they did not stir, fired her arms down the hold amongst them, killing one and wounding others.” The women were not able to hold off the attack and the whole crew was captured and thrown into prison in Spanish Town, Jamaica. On November 18, 1720, Calico Jack was to be hung. Anne visited her lover one last time and said to him “I’m sorry to see you here but if you had fought like a man, you need not have hanged like a dog.” The ladies had their day in court and were sentenced to be hung too but they “plead their bellies”. Both of the women were indeed pregnant and were given a stay of execution and sentenced to prison instead. (It was illegal for the court to take the life of an unborn child.) Mary developed a “tropical fever” and died in prison. She was buried in Jamaica on April 28, 1721. It is not known what happened to Anne. Some say that her father obtained her release and she and her child went back to Charles Town. If she died in Jamaica, no records have been found.

Shiver me timbers what a story,