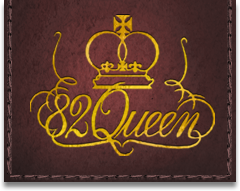 Only place where you get to eat in a garden and one of my favorite spots for “She Crab Soup”.

Originally “She Crab Soup” was based on a Scottish seafood bisque brought here in the early 18th century. Of course in the early 1900’s that was not good enough for a famous guest of our Charleston Mayor Rhett. President Taft was a frequent guest at the Mayor’s home and the Mayor was concerned that the crab soup was too pale for the President. William Deas, who was his butler, was given the task of livening up the soup. His creation is what we eat today: meat of the small female blue crab was added to bisque and then it was decorated with their orange hued eggs to add color and flavor. Tradition has it that President Taft loved the soup so much that he added it to the White House menu. Not only was the President eating it but lots of congressmen were too. Mendel Rivers a congressman in the 1940’s would arrange for thermoses of Deas’ “She Crab Soup” to be flown to DC and serviced at his committee meetings.