As I sit and watch the Democratic and Republican conventions and think what a folly they have become. Neither side can agree with each other even on minuscule ideas. I wonder how they got like this and then I start to laugh. This is nothing new. This has been happening in our government for a lengthy period of time. I think one of the funniest instances took place here in Charleston. It’s December 1860 and South Carolina has just seceded from the Union. We are our own country right now. No other states have left the Union so there is no Confederacy yet. So here we sit an independent nation without a flag to represent us. The legislature, who was housed in Columbia, chose to leave the city when the Secession Convention decided to come to Charleston for the all important vote. (Of course, the reason given was that there was an outbreak of smallpox in Columbia (only 1 case) and the delegation must leave to be safe.) It was well known that the delegates wanted to be in Charleston for the big moment since it was her vocal citizens that had been pushing for secession since 1832.

Both houses reconvene to Hibernian Hall on Meeting St. in Charleston and one of the first orders of business is a resolution that calls for a joint committee to conceive a “National Flag or Ensign of South Carolina.” Both houses submit representatives to the committee and so that they are not left out, the Secession Convention decides it will appoint a committee too. (Their group never met but at least could say that they had a “committee” that worked on this important issue.)

The joint committee presents their resolution “the national flag or ensign of South Carolina shall be white, with a green palmetto tree upright thereon: and the union blue, with a white increscent.” Within minutes of reading and discussing the logic of this choice, a movement to amend the resolution is voiced and so the craziness begins. They argued about the color of the palmetto tree and the color of the flag itself and then the Senate wanted to change the look of it by adding a coat of arms. This went of for 6 days. (Scary to think that South Carolina just left the Union and this is what they focused on) Eventually they agreed on the initial amended resolution which was proposed by Robert Barnwell Rhett Jr. on the 1st day. (Yes, his father was Robert Barnwell Rhett, “the fire-eater”.) “The National Flag or Ensign of South Carolina shall be blue, with a white palmetto tree upright thereon, and a white crescent in the upper corner.” Rhett’s reasoning was that “the Colonial flag was blue, with a white crescent, and it seemed to him the addition of a white Palmetto tree made a very simple and beautiful flag.” The palmetto tree represents the Battle of Fort Sullivan during the American Revolution. 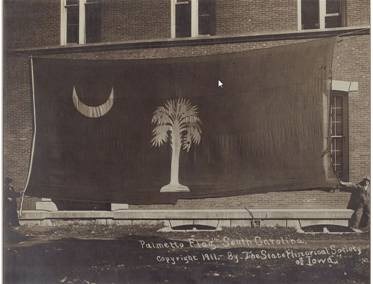 This state flag was captured by Iowa troops on February 17, 1865. Photograph was taken by the State Historical Society of Iowa. The flag is on loan today from them and can be seen at South Carolina State Museum.

There is one little difference in our flag today compared to the one in 1861; the placement of the crescent moon. In 1861, “the white crescent in the upper flag staff remains as before, the horns pointing upward.” (as seen in the above picture) The crescent moon was the symbol that appeared on the caps of Colonial Moultrie’s men during the battle of Fort Sullivan.

It was in 1910 when the crescent moon changed positions. An act was introduced that would provide for the display of the state flag over public buildings. Clemson College was to manufacture the flags “as prescribed in the Resolution adopted by the General Assembly, January 28, 1861.” Clemson’s rough draft had the crescent the way it was in 1861 but the Secretary of the Historical Commission told them “your crescent is wrong”. The act noted, “to be approved by the Secretary of the Historical Commission” who was incorrect in his comments to Clemson so today we have a crescent moon with its horns pointing to the flag pole instead of upright.

The symbols of this flag can be seen in the many different eras of South Carolina’s history; from the American Revolution to the time that the flag made a trip to the moon. Astronaut Charles M. Duke Jr. was part of the Apollo 16 mission to the moon and he took several miniature state flags with him.

We are proud of our flag no matter how silly our legislature in 1861 looked for spending 6 days on it.

They got it right!