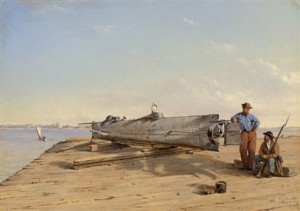 By 1863, Lincoln’s Anaconda Plan was in full effect. Most of the harbors of the South had been closed and those that were open were blocked by Union ships patrolling to ensure any blockade runners were stopped from entering the ports with their goods and supplies.   General Beauregard, who was in charge of the Charleston defenses realized that the situation in Charleston was deteriorating daily. Just like the prey of the Anaconda snake, the port of Charleston was being strangled.  The solution to the problem might be in Alabama.  An innovative diving machine that could be used to break up the blockade was being tested.  Letters of success were immediately sent to Charleston and shortly after, 2 gentleman arrived with diagrams, drawing and stories of the underwater tests of a submarine.   Once Beauregard saw the plans and listen to the wild scheme, he thought “Why not?” this might be our chance to break the blockade.  On August 12, 1863 the submarine, which is called the Hunley arrived in Charleston from Mobile on 2 flatbed train cars.  The boat was given the nickname “the fish boat” because the body looked like the body of a fish.

And so began the training. Unfortunately, the Hunley ran into a string of misfortune. 2 crews lost their lives during training exercises. Both accidents were caused by human error. General Beauregard was ready to boycott the mission “more dangerous to those that use it than to the enemy” but he was convinced by Lieutenant George Dixon to let him have one more chance.

Dixon was described as “very handsome, fair, nearly 6 feet tall, and of most attractive presence. I never know a better man; and there never was a braver man in any service of any army.” These traits and his knowledge of the Hunley (Dixon was part of the crew that built the submarine) probably was what ultimately convinced Beauregard to give the project one more chance. Dixon recruited another crew, which is amazing in and of itself seeing how the submarine had already killed 13 men. What Dixon said to those men is lost to the ages but in the post war writings of William Alexander who was assigned as Dixon’s First Officer, “We had no difficulty in getting volunteers to man her. I don’t believe a man considered the danger which awaited him. The honor of being the first to engage the enemy in this novel way overshadowed all else.” (William Alexander was recalled to Alabama on Feb 5, 1864.)

By January 19, 1864 the crew was proficient with the attack plans and reported to Beauregard their intentions and requested orders. Daily the men would make the 7 mile hike from their quarters at Mount Pleasant (It was not until February that the men were quartered closer to the Hunley), take the submarine in the back bay for practice runs, then sleep for a few hours so to be ready to head out once it was darkness fell. They would do this routine on an average of 4 nights a week and would be propelled by manpower, the submarine approximately 6-7 miles out to sea searching for the enemy till dawn the next morning. 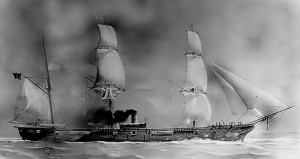 On the night of February 10, a new blockade ship appeared. The Housatonic; 207 foot, 1240 ton sloop that had 12 guns, was sitting 3 miles off shore and would be easy prey. Their plan was to attack on the first calm evening. February 17 was to be that night. “The torpedo was fastened to the end of an iron pipe, about 2 inches in diameter and 20-25 feet in length…..” The final plans were made “The officer in command (Dixon) told Lieutenant-Colonel Dantzler of Battery Marshall when they bid each other good-by, that if he came off safe he would show two blue lights.” The signal to light the shore beacon to guide the Hunley home.

The men crawled into the cold, dark, cramped interior and got into their assigned places at the crankshaft. The hatch was closed and the light of a flickering candle was all Dixon had to see the compass. Within a few hours they should make contact with the enemy. 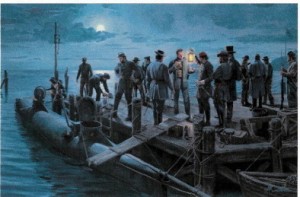 8:45pm, Office Crosby on the Housatonic: “I took the deck at 8 P.M. on the night of February 17th. About 8:45 P.M. I saw something on the water, which at first looked to me like a porpoise, coming to the surface to blow.” “The explosion started me off my feet, as if the ship had struck hard on the bottom. I saw fragments of the wreck going up into the air. I saw no column of water thrown up, no smoke, no flame. There was no sharp report but it sounded like a collision with another ship.”

Within 5 minutes the Housatonic was submerged in 28 ft. of ice- cold water. All that could be seen was her Masts. Thirteen men lost their lives that night. Five on the Housatonic and the eight men of the Hunley.

Seaman Robert Flemming climbed up the rigging of the Housatonic that remained above the water “…. While I was in the fore rigging, I saw a blue light on the water just ahead of the Canandaigua, and on the starboard quarter of the Housatonic.” On Sullivan’s Island, Lieutenant Colonel O.M. Dantzler stated “The signal agreed upon to be given in case the boast wished a light to be exposed at this post as a guide for its return were observed and answered.” 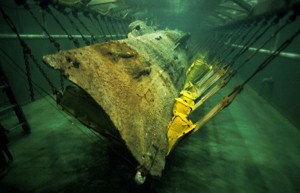 All that is known for sure is that after sinking the Housatonic, the Hunley disappeared without a trace until 1995 when a crew of Clive Cussler’s divers found her. She would not see the light of day until August 8, 2000 as she was lifted from the bottom of the ocean and moved to her new home in North Charleston. Today, the Hunley is housed in a building which is a working scientific laboratory. The Hunley Commission and a nonprofit group called the “Friends of the Hunley” have compiled of team of scientists and historians from over thirty institutions to try and solve one of the biggest mysteries of several generations: “Why did the Hunley sink? What happened to her that night in 1864?” To this day, these questions still remain a mystery. If you are in the Charleston area, you can visit the Hunley. See hunley.org for more information. 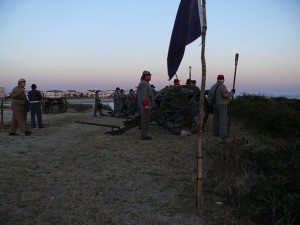 Set up of preping for cannon fire“The 3 Cannon Salute”

Tonight, 150 years later, as I follow the procession to Breach Inlet, I think of these brave men. The night is cold and crisp with a beautiful moon and a sky full of stars. (Probably very similar to that night so long ago.) As the flowers and wreaths are gently tossed into the ocean, I think of the men climbing into the Hunley and closing the hatch knowing that this is something that has to be done but they face the danger with courage and honor. As the bagpipes play their beautiful melody, I hope that the crew of the Hunley and the men of the Housatonic can know that they changed the world that night and 150 years later they are still not forgotten.