Carolina Day and The Battle of Fort Sullivan

In Charleston, June means that it’s time to celebrate Carolina Day, the way Charlestonians commemorate the 1st Patriot victory in the South during the American Revolution. Every June 28th since 1777, the church bells of St. Michaels ring out with the song of “3 Blind Mice” just as they did on the day that General Moultrie and his men triumphed over the British.

Charles Town (as it was called until after the American Revolution) was the 4th largest city in the colonies but was the 2nd wealthiest. All that wealth came from “Carolina Gold” which was rice. The Mother Land did not want to let such a wealth city slip away from her and Britain was determined to crush the revolt that was occurring in the South and to make Charles Town the example. The British sent a fleet of 50 ships and 3000 soldiers to handle the matter. On the Patriot side, we had General William Moultrie and 435 men and a fort that was made out of Palmetto trees and sand located on the tip of Sullivan’s Island and called Fort Sullivan. 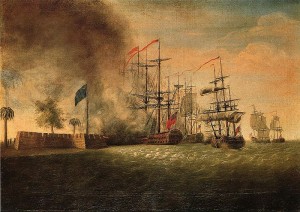 The British began the attack on June 28, 1776. They situated 11 ships in Charleston Harbor and began firing their 270 guns on the Little Fort. (Which at that time was not complete). To the amazement of the British, the Fort would not fall. For those of you that don’t know anything about a Palmetto Tree, it’s very porous and each time the British would fire a cannon, the ball would get stuck in the Fort and not explode; if it did explode then the sand that was used to hold the Fort together would fall and put out the fire. Confused by the fact that the Fort was not burning, the British moved in closer. Bad idea: 3 ships ran aground on a sandbar which is now the location of Fort Sumter. There they became sitting ducks for Patriots. Francis Marion who would be known later as the “Swamp Fox” ordered the fort’s guns to be turned on those ships. Meanwhile the battle raged on. General Moultrie told his men to fire every 10 minutes and to make your shots count. The Fort was low on ammunition. The British thought that they had won when during the battle the military flag was shot away. They cheered as the flag was lowered as they thought that this was a sign of surrender. An Irishmen, Sergeant Jasper grabbed it and refastened it yelling “let us not fight without a flag”. He died 3 years later clutching a flag in the battle to try to reclaim Savannah from the British.

The British did not fare well in the battle. They lost over 100 men, 2 Captains and at least 1 ship. The Patriots lost only 12 men. An embarrassing moment for the British fleet during the battle was when Admiral Sir Peter Parker, who was in commander of the fleet was injured by a flying splinter of wood that left “ the hindpart of his breeches shot away, which laid his posteriors bare.” This incident provided much entertainment for the newspapers of the day.

The land forces did not fare so well either. A group of 780 colonials and “Breach Inlet”, a treacherous area of water, were able to hold off the main force of 2000 British soldiers.

A British Officer wrote of the battle and the Little Fort on Sullivan’s Island: “the invincible British Navy defeated by a Battery which it was supposed would not stood one Broadside.”

There were more battles fought in South Carolina during the American Revolution than any other colony/state. (137 to be exact).

We also honor this victory in our state Flag. The Palmetto tree represents the Fort; the blue color matches the color of the men’s uniforms and the crescent moon was a symbol that appeared on their caps. (To learn more about this see my post on September, 2012)