Where did it come from?

Coinage was the backbone of monetary systems around the world. But here on U.S. soil, we did not have the precious metals that were used for coinage so the colonies turned to paper. Massachusetts was the first to use paper money in 1690 and the colony of South Carolina was second in 1703. This money was printed on behalf of the colonial governments. The money was circulated and guaranteed by the government. This was fine until after the American Revolution when the new country was left with a hefty monetary depreciation because Britain did not back the paper money with coinage as before. (A British pound was a legal tender whose value floated relative to the value of gold.) Our founding fathers hoped to take care of this situation for future generations by addressing the coinage issue in the Constitution. Guidelines in the Constitution stated that States could not be involved with coinage; only the national government. The interesting thing is that the Constitution mentioned nothing about paper money. So who would be able to handle the demand for paper currency? (The U.S. was still lacking the precious metal needed for coinage) The banks! South Carolina had 20 banks printing paper money. The paper money was a walking advertisement for the bank. So the money reflected the environment it was created in. Fancy scenes, portraits of influential people and picturesque designs were the rage. Money also reflected the current events of time. This was especially true of the time between the Compromise of 1850 and the beginning of the Civil War. Images of slavery were printed on paper money. Southern Banks thought that positive images of slavery such as a field hand smiling as he worked would help to show the North that slavery was good for both sides (the economy and the slave themselves). It was also used to help boast Southern morale and conviction.

In Charleston, 3 Broad Street was the home of Walkers, Evans & Cogswell. They were a firm of printers and book publishers who were retained as the printers for the Secession Convention and were responsible for the lithograph copies of the Articles of Secession. They also imprinted Confederate money which was authorized by the Confederate government in 1861 and government bonds during the Civil War. Below is a picture of money produced by Evans and Cogswell. The money was printed for the Bank of South Carolina. The bank failed after the war and was closed. The Reconstruction Government did honor notes issued before December 20, 1860 but any notes that were issued during the war were worthless. This changed after Reconstruction when the control of the government was shifted back to the State of South Carolina. In 1879, a law was passed that stated that money from the years of the Civil War would be redeemed for 50% of face value which would be payable in bonds. The money was turned in and then was either ink-cancelled or cut- cancelled, bundled, sealed and set aside for destruction which did not happen. For decades, the bundles sat in the Statehouse and were eventually transferred to the State Archives in 1961. No one knows for sure why the notes were not destroyed but it is thought that the task was put off for later and then forgotten. 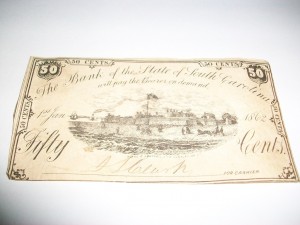 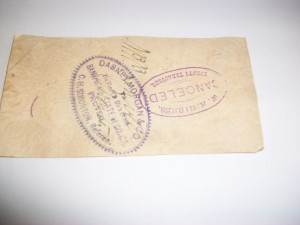 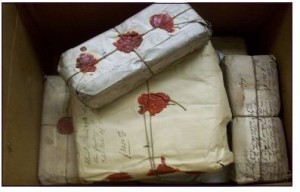 During the Civil War coinage became scarce. Citizens began to hoard gold, silver and copper coins. This made it very difficult for businesses to do transactions. Merchants turned to private minters to fill the void. The result was Civil War tokens. “It is estimated that by 1864, there were 25,000 tokens (nearly all redeemable for one cent) in circulation and approximately 7000-8000 varieties.” There were 3 main types of tokens:

By 1864, Congress had passed regulations outlawing the usage of Civil War tokens. 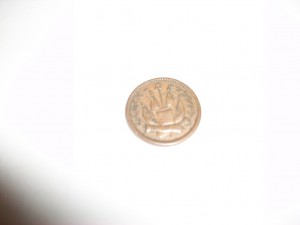 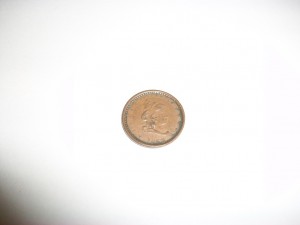 Another attempt at coinage was the Confederate Cent. This was die cast by a gentleman from Philadelphia named Robert Lovett. He made 12 coins out of copper-nickel but then afraid of being arrested for helping the South, he buried the die and the Confederate Cents in his basement. After the war, he would carry one of them in his pocket and in 1873 by accident; he spent one of the Confederate Cents in a bar in Philadelphia. His secret was out. A local coin collector purchased the die cast and made 54 copper strikes but on the 55th the die broke. None of the re-strikes were made in the original copper nickel material. Today the die can be seen in the Smithsonian. 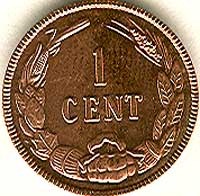 Who knew that money could be so interesting?