It’s hard to believe that it is the middle of February already. While thinking about the 3 day weekend for President’s Day, I had a great idea for this month’s blog: let’s talk about the Presidents that have visited Charleston.

The first President to visit our fair city was the very first President of our country, George Washington. After he became President, Washington decided he should visit the Southern States to learn more about this region’s political sentiments and their economy. His time spent in the South was called the “Southern Tour”. Washington arrived in Charleston in 1791 to great fanfare. His barge, which departed from Mount Pleasant, was manned by 12 local ships captains. The barge was accompanied by “a flotilla of boats of all sizes filled with ladies and gentlemen” including 2 boats that carried bands that were to play as the President crossed the harbor. During his weeklong stay, President Washington was wined and dined in traditional Charleston fashion. One of the many parties that the President attended was a formal ball that was held in the Old Exchange building. This was such a monumental occasion that the Ladies of Charleston wore pictures of George Washington with the wording ‘Long Live the President” in their hair. The President remarked that the women of Charleston were among the most elegant to be found anywhere. During his stay, he resided at the home of Thomas Heyward (Signer of the Declaration of Independence for South Carolina) which is located on Church St. The President had so many offers from prominent citizens of Charleston to stay with them, in an effort not to insult anyone so he had the city council rent him Heyward’s home. (The President used his own funds to pay for his lodging. Probably the one and only time in our history something like this would happen.) During that time, Heyward stayed at his plantation. Early morning risers were treated to the sight of the President racing his horse up and down Broad St. for exercise. 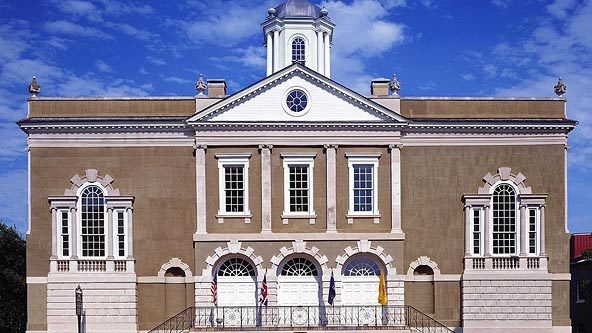 President Taft and his wife Nellie were frequent weekend guests of Mayor Rhett at his home on Broad St. It is said that the Mayor was concerned that the crab soup which was to be served with dinner was too pale for the President. William Deas, who was the butler for Mayor Rhett, was given the task of livening up the soup. His creation of “She Crab Soup” which was based on Scottish seafood bisque brought here in the early 18th century. It is what we eat today: meat of the small female blue crab was added to bisque and then it was decorated with their orange hued eggs to add color and flavor. Of course presentation is everything here in Charleston as Mrs. Taft learned. She thought Southerners were “strange” for their irritating ritual of “always taking a half hour to get ready for everything.” (And that includes our food!J) Tradition has it that President Taft loved the soup so much that he added it to the White House menu. 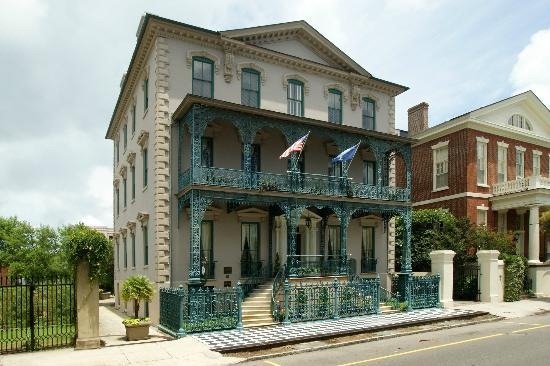 The Home of Mayor Rhett

Beginning in December of 1901, Charleston was the hostess to the South Carolina Interstate and West Indian Exposition. The expo was designed to promote the resources and industry of South Carolina. April 9, 1902 was designated “President’s Day” at the Expo. President Theodore Roosevelt arrived outside the city by train and then took a ship into Charleston. A parade of 3000 people marched to the exposition as thousands lined the streets to view the procession. President Roosevelt visited the exhibits, especially the one that housed the City Hall Collection. He addressed distinctive guests and was invited to the Women’s building which was located at Lowndes Grove Plantation where he was treated to a Charleston lunch which included tea grown in Summerville. After his day in Charleston, the President was escorted to Summerville where he stayed at Pine Forest Inn. The Inn boasted its own power plant, telegraph office, long distance telephone service and steam heat. To entertain yourself while visiting the resort, a guest could partake in three bowling alleys, shuffle board, billiards, pool tables, 130 golf links, a stable of 50 horses or listening to the in-house orchestra. 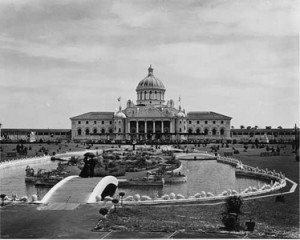 The Cotton Palace at the Exposition

The next two gentlemen were not Presidents during their time here in Charleston but became President soon after.

So a sister decides to set her brother up with one of her co-workers. Sounds pretty harmless unless the brother is John F. Kennedy and the lady is Inga Marie Arvad who was thought to be a Nazi spy. Before coming to the States, Inga covered the Berlin Olympics for a Danish newspaper. There she met and interviewed several men from Hitler’s inner circle. She even interviewed Hitler himself. Hitler invited Inga to sit in his private box which is where a picture of herself and Hitler together was taken. Later Hitler would give her a silver and red frame which held a signed photo of himself. (Hitler rarely gave out personal photos.) 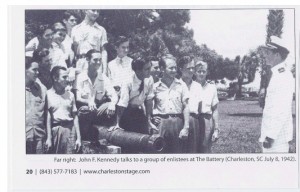 JKF at The Battery

Once Inga reached the States, her political views were not well received. The FBI was contacted by one of her classmates and then again by one of JFK’s jilted girlfriends that she had Nazi loyalties. (This led to a full scale investigation which included surveillance and wiretaps.) The findings were delivered to J. Edgar Hoover. Once Hoover realized who Inga was dating the information was shared with the Navy Intelligence Division. A gossip columnist got wind of it and leaked that an ex-ambassador’s son was the “romantic target of a suspected Nazi spy, and Pa no like.” The next thing JKF knows is that he is being transferred to Charleston, SC. “They shagged my ass down to South Carolina because I was going around with a Scandinavian blonde, and they thought she was a spy!” JKF was not happy to be here! He thought Charleston a provincial backwater and that the Union should have let us go during the Civil War. 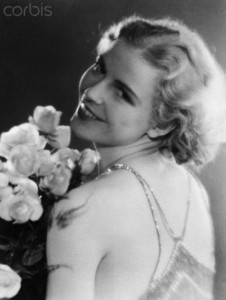 Inga did come to Charleston to visit JFK on 3 different occasions and while she was here, their hotel rooms were wired and the couple was followed. For awhile there was even talks of marriage (that is a whole another story) but JKF was shipped off to the Pacific and as time passed the romance slowly fizzled. “There seemed no way in which her old intimacy with Jack could be reestablished without the same difficulties they had encountered in Washington three years before, and Inga wisely refused to try, particularly with Jack having made up his mind to run for a congressional seat.”

On a spring afternoon presidential candidate Barack Obama spoke to Charlestonians from the front porch (or piazza as we call them in Charleston) of 21 King St. He did not forget that memorable day because during his victory speech in Chicago’s Grant Park he told the crowd of 1 million and those watching at home “Our campaign was not hatched in the halls of Washington. It began in the backyards of Des Moines and the living rooms of Concord and on the front porches of Charleston.” Michelle also spoke from the piazza and was very impressed, “”Talk about the White House, I think this house is pretty terrific. I’d like to come back and spend the night!” On that day, the piazza of 21 King St was a symbol of American’s political process. You had whites, blacks, Democrats,Republicans, and “undecided’s” all listening to a candidate for the President of the United States of America. 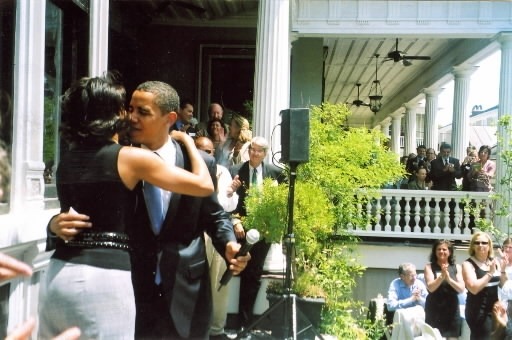 Hope you enjoyed hearing about some of the Presidents who spent time in our fair city.