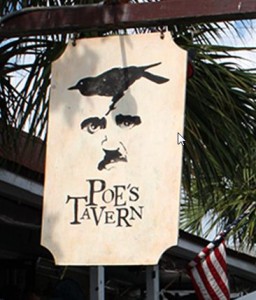 A great place to grab a drink and some food before heading to the beach or Fort Moultrie.

Poe’s Tavern, which is located on Sullivan’s Island, derives its name from Edgar Allen Poe who was stationed at Fort Moultrie for 13 months beginning in November of 1827. Poe enlisted in the army under the name of Edgar Allan Perry to avoid a large debt that he had accrued. His time at Fort Moultrie inspired him to write the Golden Bug.